If you are watching season 3 episode 6 of the television series Killing Eve you may have noticed that the episode is dedicated to the loving memory of Jay benedict. You might be wondering who Jay Benedict is and how did he die? What role did he play in the Killing Eve Series? If you want to know the answer to these questions you are in the right place.

Although the very less info about him is available on the internet at the moment we can guess that this tribute is about the death of the great actor who passed away a month ago, in the time of global coronavirus pandemic.

Jay Benedict passed at the age of 68 on 2020-April-4 while battling with coronavirus for weeks.

The news is confirmed by the TCG ArtistManagement which is the leading artist management firm working with actors in the Hollywood industry.

“It is with great sadness that we announce the passing of our dear client Jay Benedict, who this afternoon lost his battle with COVID-19. Our thoughts are with his family ❤️

It is with great sadness that we announce the passing of our dear client Jay Benedict, who this afternoon lost his battle with COVID-19. Our thoughts are with his family ❤️

Accordingly twitter we can confirm that his death is because of COVID-19. Benedict is the great actor who worked on numerous television shows and movies such as Lilyhammer, The Dark Knight Rises, and Foyle’s War. He played the role of Rich Twit on 2012’s popular movie The Dark Knight Rises and also on the role of newt’s father on James Cameron 1986 movie Aliens.

Talking about his personal life, He was born in Burbank, California, United States but spent most of the time in Europe working on various cinematic projects especially in the United Kingdom.

He is married to Allo Allo actress Phoebe Schofield with whom he had 2 sons and he also had another child from a previous marriage.

Shocked to hear one of our most brilliant actors and kind lovely man Jay Benedict has passed. Married to my lovely friend Phoebe Scholfield #AlloAllo My heart goes out to her and her family at this sad time #PhoebeScholfield @FreddieBenedict #LeoBenedict #SyncorSwim #COVID19 pic.twitter.com/YJ7nn25ftv

Schofield’s Allo Allo Colleagues and friend has also posted tributes to benedict on twitter saying shocked to hear about the death of one of the most brilliant actors and lovely man who married to Phoebe. She also said, “My heart goes out to her and her family at this sad time.”

A few weeks ago Adam Schlesinger from Fountains of Wayne and Andrew Jack from star wars had also died because of CoronaVirus. 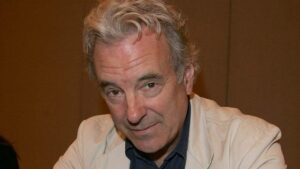 Although killing eve showed the tribute to him in the following episode, We are still unable to find the connection between him and the BBC America series as he’s not credited in the tonight show either in the IMDB page.
We’ll surely update on this matter if new series/shows dedicate him to their title card.

This global health pandemic has made tons of us suffer and celebrities and popular personals are not far from it. This year many celebrities have lost their life due to the COVID 19 and millions of peoples affected worldwide.

We hope all of you are doing great and following social distancing as it’s your chance to save the world by doing just nothing.

This is the information we got about Jay Benedict Killing Eve. We want to show our deepest condolences to Jay Benedict from our HollywoodMash team. If you want to connect us in our social media please hit the like button on this page.

If you are a fan of Killing Eve, You can play a quiz to find if you are an MI-6 agent or The Twelve