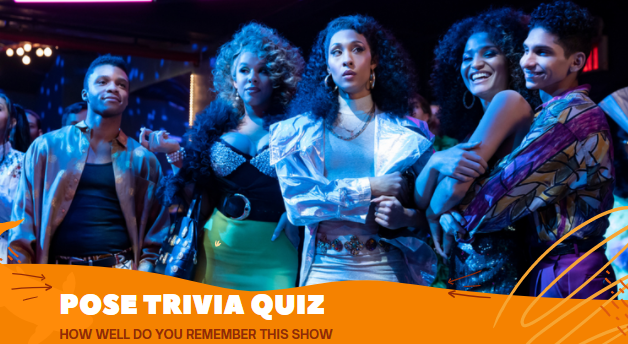 This is a POSE Ultimate Quiz, where you will be given trivia questions from the show. If You are a fan of the show then this will be easy for you. The pose is an American drama television series set in New York City in the 1980s, the early 1990s in the second season, and the mid-to-late 1990s in the third season, depicting the city’s African-American and Latino LGBTQ and gender-nonconforming drag ball culture scene. Dancers and models are among the featured characters, who vie for awards and notoriety in this underground society and support one another through a network of chosen families known as Houses.

Who is the father to Damon Richards?
Lawrence
Richard
Mark
Robert

Why did Blanca evict Papi from his home?
He was selling drugs
He stole car
He killed someone
He stole dog

What was Elektra's first house called?
House of Abundance
House of Horror
House of Party
House of Fierce

Who once worked in Trump Tower?
Stan
Lulu
Judy
Angel

who informs Patty of her husband's affair with Angel?
Matt
Mick
Ricky
Blanca

What is the name of the oldest children of Stan and Patty Bowes?
Amanda
Kate
Mindy
Sydney

Where did Candy was killed?
Motel
Her house
Pub
Forest

Who said this quote


Listen, you're gay, I'm gay; we're all dancing under the same fucking rainbow.

What is the name of the young daughter of Carmen (Blanca's Cousin)?
Xiomara
Manuel
Kate
Maddie

Who is the first member of the House of Evangelista?
Damon
Helena
Lulu
Candy

Who said the quote


They'll never know that feeling what it's like to love without worrying that you're gonna die, or worse yet, that you're gonna kill somebody. I don't know what's shittier having that freedom taken away or never having had it to begin with.

Can you remember the name of the following character?

Which “Pose” Character Are You?