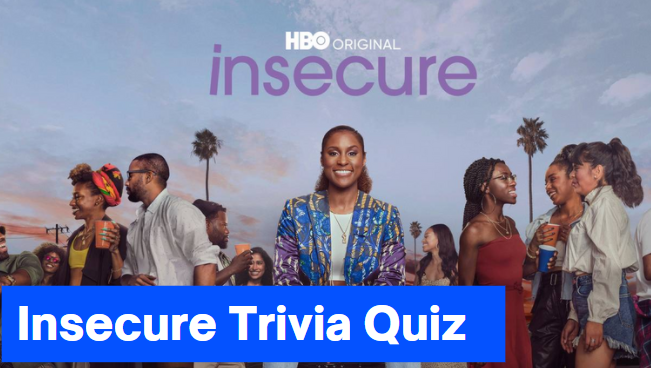 This is an Insecure Trivia Quiz Where we have collected trivia questions from the show with multiple choice answers. Every question will have 4 options and 1 of them will be correct. This will be easy for the fans of the show. Insecure is a critically acclaimed comedy-drama whos which was created by Issa Rae and Larry Wilmore and is based on web series named Awkward Black Girl which was the creation of Issa Rae. The series was first telecasted on HBO in 2016 as a weekly show. You can watch it on HBO Now and HBO Go as well. The show was critically acclaimed and was also positively received by the general viewers. Due to positive feedbacks, HBO renewed the series up to 5 seasons.

This show follows the story of the 2 black female protagonists, Issa (Issa Rae) and Molly (Yvonne Orji). They are 2 best friends who are together since their college days. The show follows how they navigate their career balancing with their relationship and how insecure they really are. If you are up to date with the Insecure then you are good to go. You will do good in this Insecure Trivia Quiz. So, without overdue let’s start the quiz. Let’s see how well can you score. If you like this quiz then don’t forget to share this quiz with friends and family.

What is this series adapted from?
Awkward Black Girl
Cute Black Girl
Struggle of single girl
Help me please

Who is the Director of Student Outreach at We Got Y'all?
Frieda
Kate
Lawrence
Issa

How long were Issa and Lawrence together before they broke up the first time?
5 Year
3 Year
6 Year
2 Year

Why did Molly break up with Jared?
Fooled around with a guy
Kissed a girl
Sold her house
Cheated with her mother (and also father)

How did Lawrence find out Issa cheated?
Saw the text
Saw the video
Molly told him
Saw photo

Which character Rap in front of the mirror?
Issa
Lawrence
Molly
Diane

What do Issa and Nathan do on their first date?
Break into her childhood home
Skating
Dancing
Rob a bank

Why did Molly break things off with Dro?
he brings his wife to the party
he lied about his age
he stole her dog
he forgot her birthday

Who said, "You gotta f**k a lot of frogs to get a good frog."
Molly
Issa
Lawrence
Isaac

Who got tased while running toward Beyonce's entrance?
Kelli
Issa
Molly
Lawrence

Who is the godmother of Tiffany's daughter?
Kelli
Issa
No one
Molly