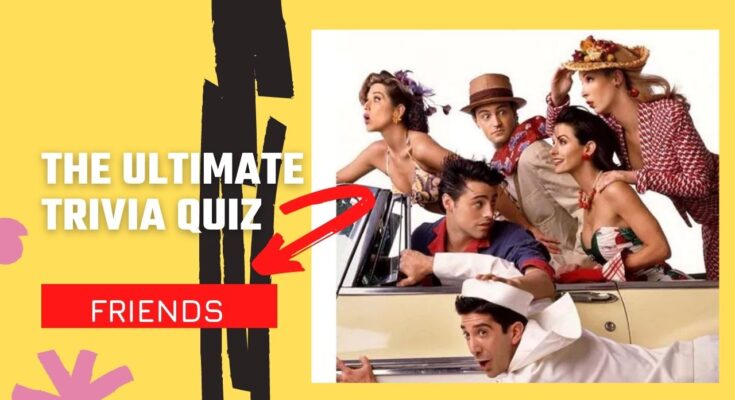 Friends is a popular sitcom that originated in the United States and was produced for television by David Crane and Marta Kauffman. It debuted on NBC on September 22, 1994, and ran until May 6, 2004, for a total of 10 seasons. Rachel Green is a sheltered but kind woman who leaves her wedding day and is living an affluent but unfulfilling life. She discovers her childhood friend Monica Geller, who is a tightly wound but caring chef. The tale follows their adventures together. After moving into Monica’s apartment above Central Perk and joining Monica’s group of single friends in their mid-20s, Rachel starts working as a waitress at the West Village coffee house Central Perk. Monica’s previous roommate Phoebe Buffay, an eccentric masseuse and musician; neighbor Joey Tribbiani, a dim-witted yet loyal struggling actor and womanizer; Joey’s roommate Chandler Bing, a sarcastic, self-deprecating data

We have made a Friends trivia quiz for the fans of the show. If you have watched all the episodes of the show then this quiz will be easy for you to attend. Let’s see how many questions can you answer correctly.

Which character has a twin?
Phoebe
Rachel
Ross
Chandler

Where do Rachel and Ross go on their first date?
A planetarium
Movie
Circus
Party

How many times did Ross get married and then get divorced throughout the course of the show?
3
2
7
6

Rachel, the protagonist of the show,  ran away from her wedding in the pilot episode because she has changed her mind about marrying her fiance. What was the name of her fiance?
Barry
Jerry
John
Oliver

Who was the last one to find out that Monica and Chandler were dating?
Ross
Monica
Chandler
Joey

Monica divides her towels into a few different categories. But how many are there?
11
5
3
7

Which of these fruits does Ross Geller not like because he has an allergy to them?
Kiwi
Mango
Strawberry
Orange

Who delivered the very final line in this series?

Hi
Papa
Mama
You were on Break

Joey had a Stuffed penguin. What was its name?
Huggsy
Kissy
Stuffy
Bestie

Ross and Monica had a dog when they were kids. What is the dog's name?
Chi-Chi
Sammy
Cutie
Tri-Tri

What hangs on Monica's purple door?

What is Rachel’s favorite flower?
Lillies
Roses
Mary Gold
She hate all flower