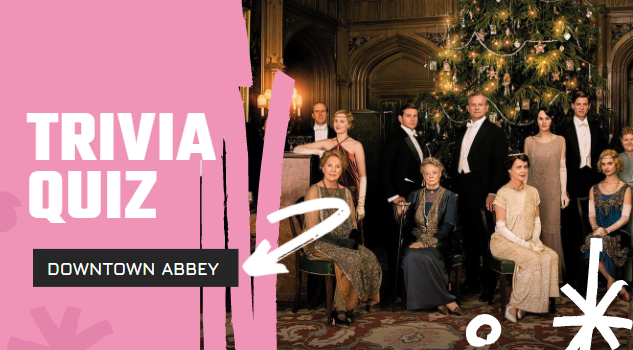 Downtown Abbey Trivia Quiz where you will be asked some of the popular trivia questions from the show. You need to choose the right answer from the option given. If you are a fan of the show then this should be easy for you to succeed. If you have not then you need to watch the show as soon as possible. Julian Fellowes developed and co-wrote Downton Abbey, a British historical drama television series set in the early twentieth century. The series premiered on ITV in the United Kingdom on September 26, 2010, and on PBS in the United States on January 9, 2011, as part of its Masterpiece Classic anthology, which supported the series’ development.

The series depicts the lives of the aristocratic Crawley family and their domestic servants in the post-Edwardian era, set in the fictional Yorkshire country estate of Downton Abbey between 1912 and 1926, with the great events of the time having an impact on their lives and the British social hierarchy. Let’s start Downtown Abbey Trivia Quiz.

Which character is known as Viscount Downton when he was young?
Robert Crawley
Edith Crawley
Tom Branson
Mary Crawley

Which historic event has occurred before the first episode of Downton Abbey?
Titanic
World War I
Dead of King Edward
World War II

Lady Mary, Lady Edith's elder sister, had an especially tense relationship with her. What did she do after learning about Mary's involvement in the death of Turkish diplomat Kemal Pamuk?
She revealed all in a letter to the Turkish ambassador
She slapped her
She threaten her
Nothing

What did Molesley do in season 5 to impress Phyllis Baxter?
Dyes hair
Bakes the cake
Painting
Wrote a letter

Patrick Gordon, a recovering Canadian soldier at Downton Abbey, claimed to be Patrick Crawley in Season 2. Who was the only member of the family to believe him?
Lady Edith
Lady Mary
Cora Crawley
Robert Crawley

After getting married, Sybil and Tom have a daughter together. What is her name?
Sybil
Sara
Mary
Olivia

In the 2012 Guinness Book of World Records, Downton Abbey was mentioned for what record?
Highest critical review rating for a TV show
Most expensive show
Highest viewership in a single day
Highest number of actor in a show

Where does the family travel in the Season 3 Christmas episode?
Scotland
France
Germany
Sweden

What does Lady Rose want Lord Grantham to buy for the house?
radio
garden
curtain
dress

Michael Gregson's wife had been declared insane, leaving him unable to divorce her under the legal system of that era. He then discovered he could obtain a divorce by moving to which European country?
Germany
Italy
Poland
Portugal