Kate Winslet is one of the most popular actresses working today in Hollywood. She is well known for playing the iconic role in the Titanic. Her new movie Ammonite was recently released where she plays the role of Mary Anning, an English fossil collector, dealer, and paleontologist, and falls in love with the wife of one of her clients. And she will be also playing a leading role in the next Avatar movie. so she is been busy doing interviews on various outlets. In one of the interviews with Variety, she talked about her obsession with Schitt’s Creek.

If you have season 6 episode 1 of Schitt’s Creek, You might have noticed Kate Winslet’s mention.

David: “You mixed up the day and the month on your ticket again, didn’t you?”
Alexis: “No. No!”
David: “Like that time you showed up to Kate Winslet’s wedding a month late.”
Alexis: “The calligraphy was hard to read and Billy Zane also did the same thing, David!” 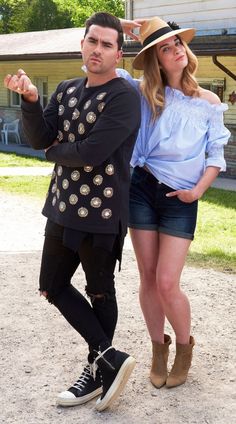 So, Interviewer asked her about that particular scene and if she would be open to acting out the scene with Annie Murphy. She said she will definitely do the scene with Annie because she loved that scene. She also called Dan Levy immediately and thanked him for keeping her in that scene. Other than Schitt’s Creek the only other show she watches is Normal People and It’s Always Sunny in Philadelphia.

If you have not watched Schitt’s Creek yet then please close this article and start streaming Schitt’s Creek now because it is one of the best comedy series available today. You can watch it on Netflix. It is a Canadian television sitcom created that was created by Dan Levy and his father Eugene Levy. The show follows a rich family that suddenly goes bankrupt and had to live in a small town named Schitt’s Creek.