This is one of the most heart warming news from 2019. John Chambrone is Marvel superfan who proposed to his boyfriend Richard Owen in front of Captain Marvel herself. He used infinity stone ring to propose to make the moment special. Brie Larson was happily surprised by this and later tweeted she was changed by this event

Y’all I was present for a proposal and I am CHANGED. Much love to the happy couple!!!! https://t.co/UMc4WofFja

They were in ACE comic con waiting in line for the photo op and when their turn came, John looked at the Richard said he love him more than Captain Marvel and proposed to him on his one knee. 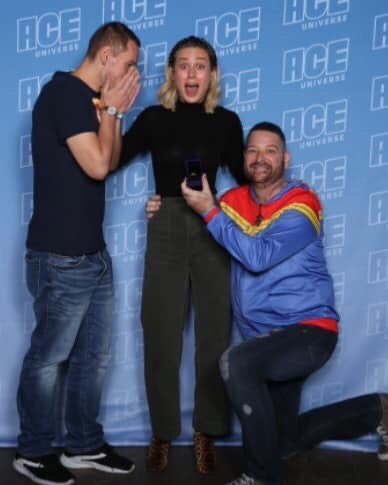 This moment is special because their first date movie was Captain Marvel. They have not decided on Marriage date yet but they have publicly invited Brie to their wedding.

This is a dream for every Marvel fan to share their special moment with their beloved Superhero. John was fan of Marvel Comic and specially Captain Marvel from his childhood. And after he found out Richard have not seen Captain Marvel, John took Richard Owen to show Captain Marvel in their first date. Richard loved the movie and can relate the story of Captain Marvel.

After Brie posted about this event in her twitter account, People were genuinely happy by their engagement and the reaction of Brie.

Your reaction is everything😂 pic.twitter.com/NT5l0Gnfnz

Quiz : Can you recognize Marvel Heroes from their childhood Pictures?
Can You ?

Here is Why Chris Evans is Real Life Superhero
Here is why
Post Views: 196