Lucifer is back at most binged show of the week

Good news Lucifer fans, Lucifer is once again back at the most watched series of the week. Tv Time publishes list of series which is binged most every week. Lucifer was at that list for several month last time when it was released on Netflix.  Now it back once again at the top 10 most binged series from November 4 to November 10.

Since Netflix is available in more than 200 countries , it is possible that Lucifer is getting new audience every day. And They are getting hooked on the show like every Lucifer fans. 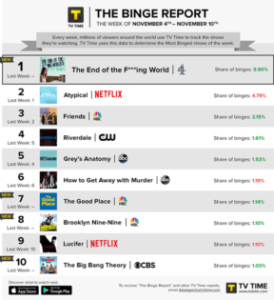 The New season of “The End of F***ing world” was released recently so it got number 1 spot on this weeks report. Lucifer was on number 9 spot, since new season of Lucifer was release several month ago it is still impressive that it got the spot on the list which it deserve.

What is Lucifer about?

Lucifer is about Devil who got bored with being the Lord of Hell so he decided to visit Los Angeles, where he opens a nightclub and forms a connection with a homicide detective. The show was cancelled by Fox last year and was again revived by Netflix due to uproar of Lucifer fans.

Lucifer was again renewed by Netflix for fifth and last season. It has been reveled that Last season of Lucifer will be divided into 2 parts with 8 episode each. First part of the final season will be released on 2020 where as last part will be on 2021

Also , If you are fan of Lucifer then you can take part on this easy Quiz which we developed.